There are plenty of ways to reflect on a year, but as someone who draws every day of the school year I thought I’d share some of my favorite #napkinart pieces from 2014.

For those unaware, I draw my kids’ favorite characters (sometimes of all time, sometimes of that very momenty) for their school lunches. I owe a lot of my renewed creative spark and enjoyment of drawing to them.

So, in no particular order, here are my top 14 napkins from last year. 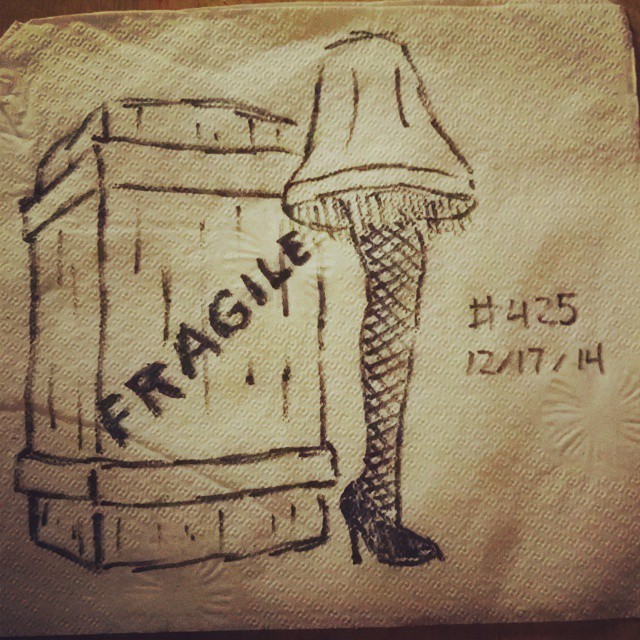 1. Finally got a chance to share “A Christmas Story” with the kids. Compared to my first time watching it, they understood many more of the jokes than I had as a kid. 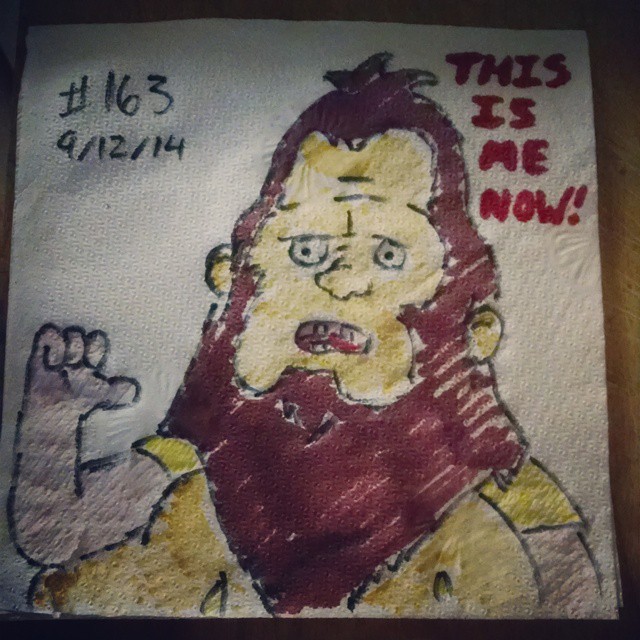 2. We’ve been big fans of “Bob’s Burgers” for a while, but I think the “Beefsquatch” and “Burgerboss” episodes are my favorites to date. 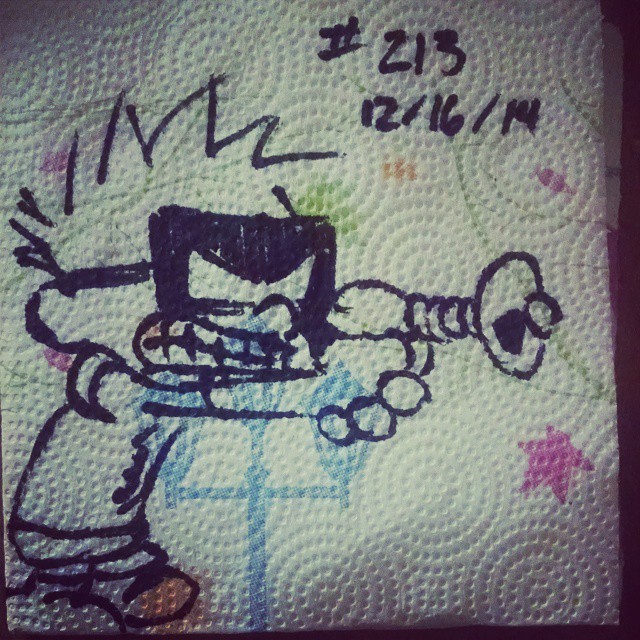 3. I introduced both of the kids to Calvin and Hobbes this year. Let’s just say that bedtime stories haven’t been this interesting in a long time.

Proudly, I can say that John read about half of a full-page Sunday spread by himself the other day. It just goes to show that comics CAN be educational. 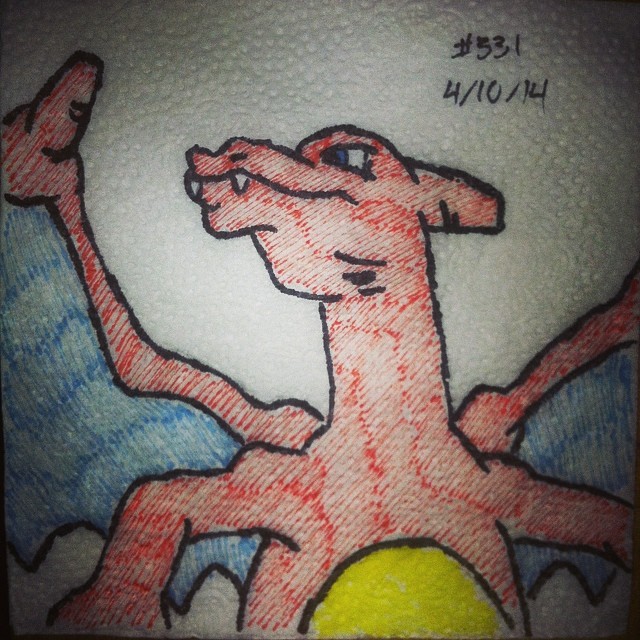 4. One of the most iconic Pokemon characters, Charizard, was revealed as a returning fighter in Super Smash Bros. earlier this year. I celebrated the announcement with some napkin art. 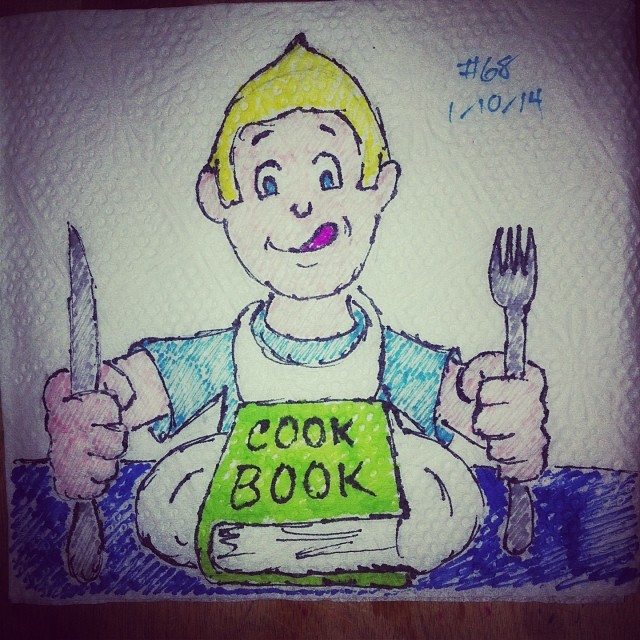 5. After revisiting this odd piece, it makes me a little sad that John has stopped requesting oddball subjects for his napkins. This one was to “draw me eating a book.” It works on so many levels, doesn’t it? 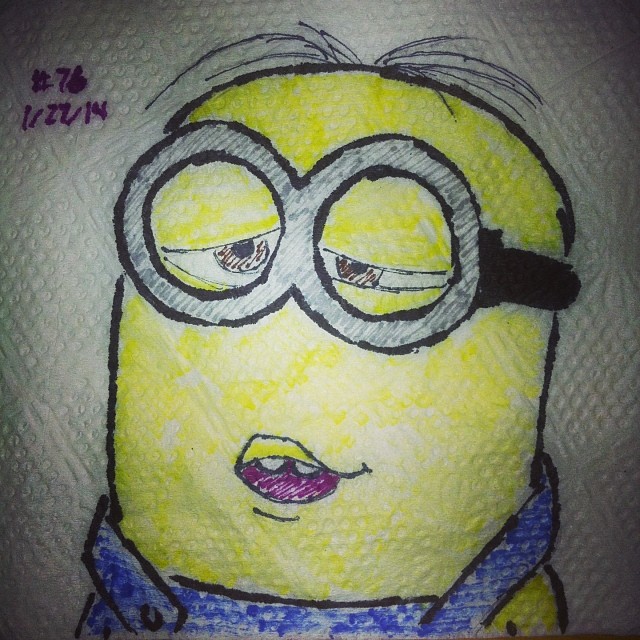 6. Who doesn’t love a minion, especially a minion in love? 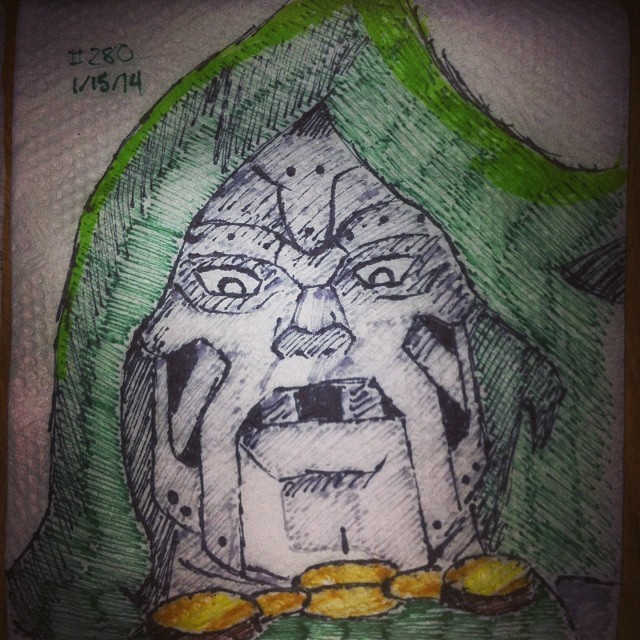 7. Doctor Doom made a few appearances in the Ultimate Spider-Man cartoon that got fed into our Netflix queue, so I thought a napkin for Taryn was warranted. 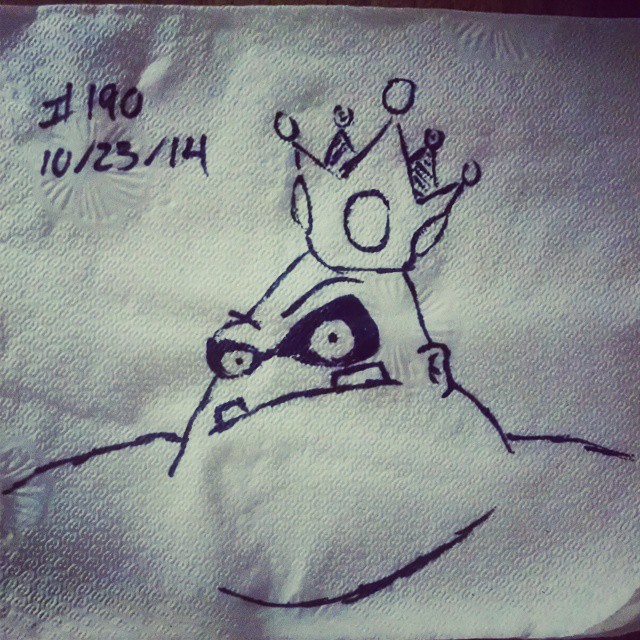 8. Although I can’t quite recall what first got John into “Punch Out!!” for the Wii, I can thank him for a few pieces of napkin art and a whole new mashup that came out of it. 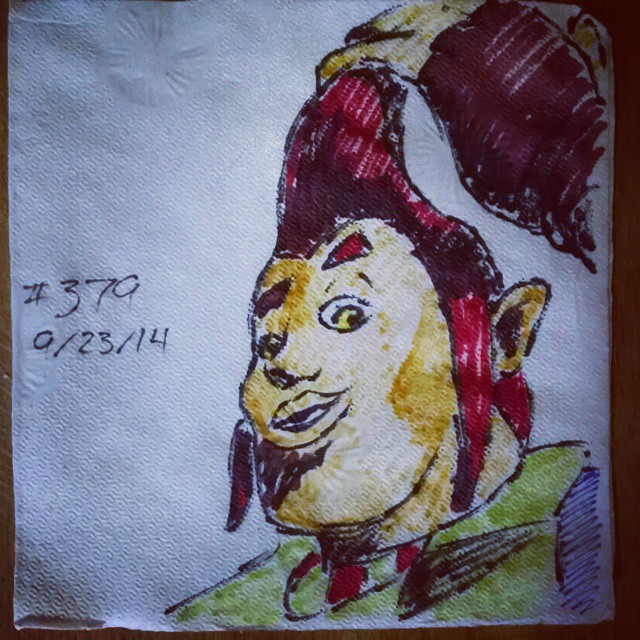 9. I picked this one because I was really proud of how well Groose’s look and the illustrative style from “Legend of Zelda: Skyward Sword” reproduced on a napkin. I swear that I thought he would end up as Ganondorf in the end. 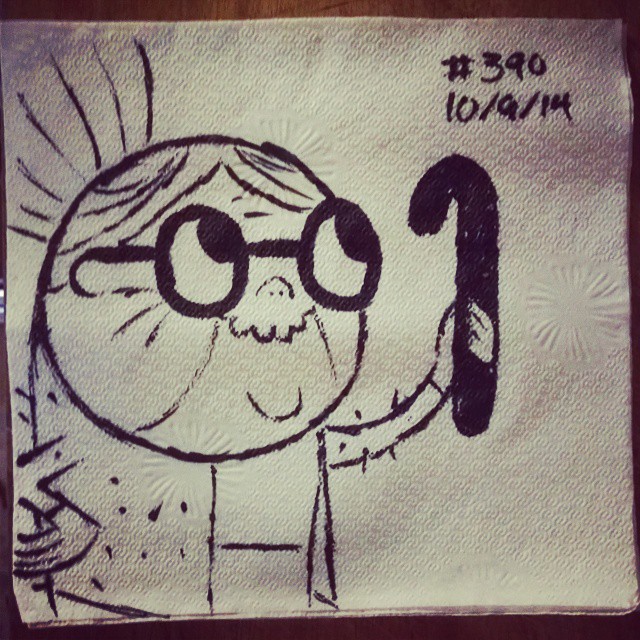 10. Every once in a while, the kids will dig out our DVDs of “Foster’s Home for Imaginary Friends.” Those days are good days. 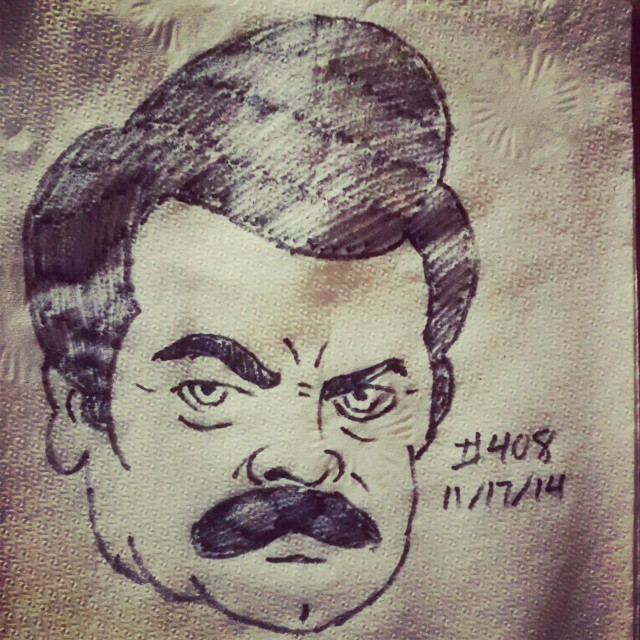 11. Taryn got REALLY into “Parks and Recreation” this fall. Ron approved of her prowess in choosing television programs. 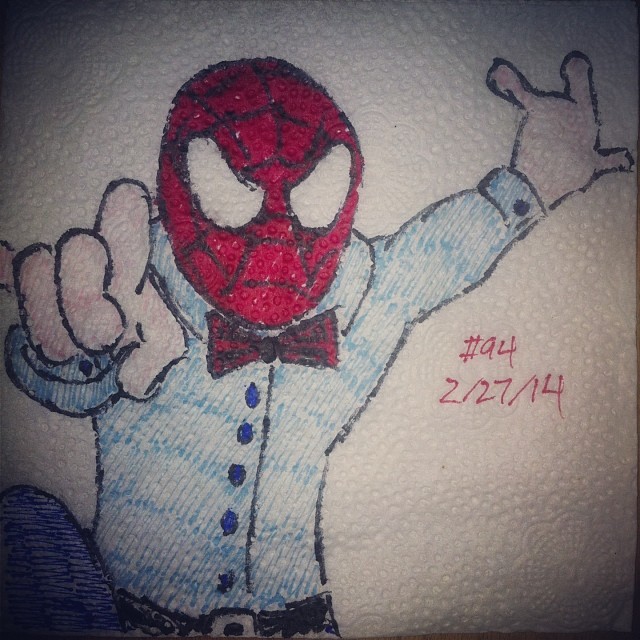 12. Another John request I had some fun with. He asked to draw me as Spider-Man, and Spider-Dad was born! 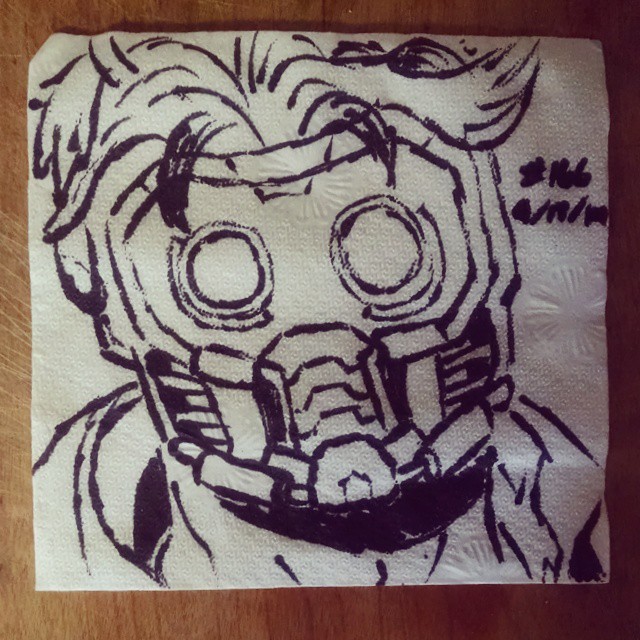 13. “Guardians of the Galaxy” was such a huge hit in our house and for so many movie goers this year. John even dressed as Star-Lord for Halloween, and this napkin was done just after he picked his costume. 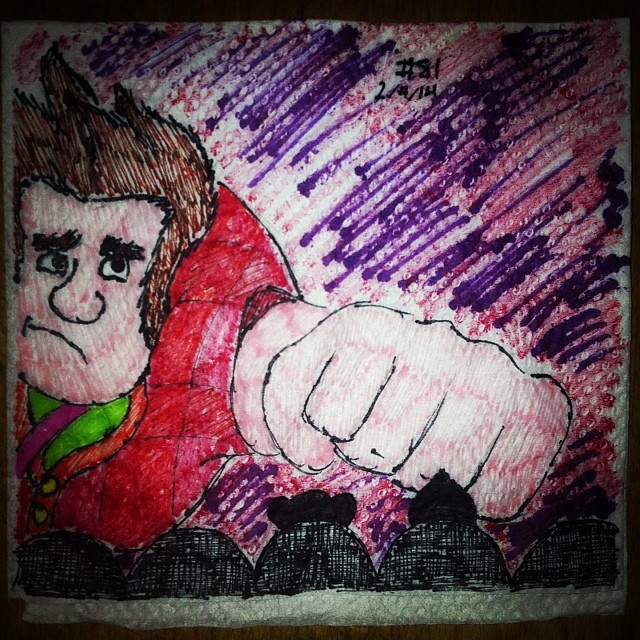 14. Last but not least, I was able to work a few mashups into the napkins this year. John was responsible for the care of a stuffed animal named Brownie Bear early last year. When he and the bear cuddled up to watch “Wreck-It Ralph,” I thought it lent itself to a sweet MST3K mashup. Mission accomplished.

So what’s on tap for next year, napkin art and beyond? Well, I’ve pledged to blog more, which will hopefully cause me to create more so that I have more to write about. I’m also taking half of all of my freelance and mashup earnings and putting them towards a scooter for myself to cut down on gas costs.

I’ll be making a presentation at the Scranton Public Library on Jan. 26 about the process of making digital art, so that should be interesting. And, if any luck comes my way, I hope to be a vendor at a local or regional comic convention to expand my audience and sell some sweet prints, stickers, and more.